It used to be known as “TV-turnoff week”, and it was probably easier back then to only have to give up TV. Now, the challenge is to give up your addiction to all screen devices. The official dates for SCREEN-FREE WEEK in 2013, are from April 28th to May 5th. I got to say, it’s a tall order. I’m actively looking for a new job, so in my case I can’t afford to not check my emails. But I do plan on going at least “TV and video game free” starting tomorrow, and for the rest of the week. I’ll be posting my impressions once the challenge is over.

One might wonder why I might encourage my readers to drop off the grid for a week, because at the same time, I’m reducing the potential amount of visitors I get to this site. I figure this is probably the main reason the mainstream media doesn’t talk about this campaign much. But technology4democracy isn’t about popularity, it’s about principles. Media addiction is real, and it’s especially a problem for some people. I believe the electorate needs to be more media-savvy, and campaigns that promote awareness of the pitfalls of mass-media, should be encouraged.

I cannot think of anything sadder than people who voluntarily sign up to receive a modern-day equivalent of the Ludovico Technique. ( see image below ) 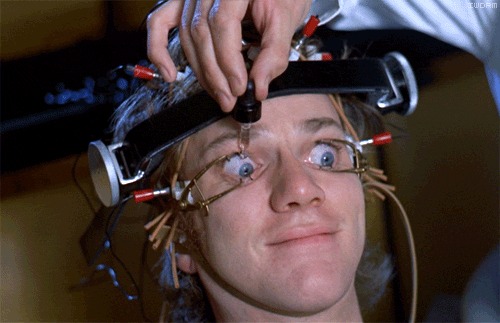 For those who missed “A Clockwork Orange”, the Ludovico Technique is a ghastly sci-fi medical procedure that uses drugs, media, and  as you can see,   eye-clamps,  in a vain attempt to reform criminals.

So  in conclusion, please go ahead, take off your metaphorical media-clamps for a week, and see how it feels, I dare [ YOU ] !

POST-EVENT-UPDATE: I gave it a shot, and in my case Screen-free week was a total failure. During that week, not only did I watch tv and movies, and play videogames, I also signed up for a new cel phone, as well as moved into a new pad that comes with cable tv. So yeah, a total bust!  :(