From Poison being turned into a trans woman so that the proucers of Final Fight would have an excuse to justify having male characters beating up women, to Birdo in Super Mario being retconned into a full female, there has been alot of different charcters in video games that are trans. This time around, I decided to try something different. This article is opened to all readers who might want suggest which TG ( transgender ) characters should be talked about. Suggestions can be added in the comments section and can also be emailed to contactt4d@gmail.com.

NATNOTE: I intend to update this article as time goes on, and as soon as I get a new laptop. Thanks for bearing with me. :)

At some point in 2015, NBC plans to launch a re-imagined version of Wizard of Oz. They need to be careful, because in my opinion, the 15 or so Wizard of Oz books that have been written by L.Frank Baum, the creator of that magical land, are THE most transgender positive, mainstream story books out there. Starting from the 2nd book, It’s all about a little boy who didn’t know he’s actually supposed to be a princess. Those books have a really positive message about women’s rights, and about the fluidity of gender. Having the Tin man say that it’s ok to be a girl, and that some of his best friends are girls, really had a positive effect on me as a gender-confused, genetic little boy. I just wanted to be accepted, like Princess Ozma who used to be  male, was accepted. But unfortunately, I have a feeling they’re going to heterosexualize the crap out of that story, like Disney recently did with their hetero-centric, re-imagining of the land of Oz.

Because according to an article I recently read in Advocate magazine, the producers of the new NBC series are planning to turn it into a “grim and gritty”  adult retelling of  the L. Frank Baum’s original story. So what’s the message here, NBC and Disney? That over the top violence is ok, but that positive stories about gender equality and transgenderism, are not?

I agree I shouldn’t judge a book by its cover, or in this case, a TV series by its promotional slogans, at least not until I have seen it. But if it turns out to be a massive whitewashed debacle that erases all the setup about Princess Ozma’s origin, like the recent Disney movie did, I’m not sure I have the stomach to see it. I mean, come on Hollywood producers, why do you have to go slander what is to a lot of people, the only trans-friendly classic fairy tale story out there? You should be careful about messing with our LGBT heroes. Also, why does it always have to be re-imagined without the positive female role models? In the classic L.Frank Baum books, it’s the girls that totally kick ass. The supporting male characters like the Tin man, the Scarecrow, and the Lion, are at best C-3POesque in their bumbling abilities. Why can’t girls kick some ass, for once?

So what am I going to do about it? I’m going put NBC on notice, and follow-up on that story. And if they end up taking out all the Feminist and LGBT-friendly elements out of those wonderful stories, you can be sure I’ll be writing some more to complain about it.

NATNOTE: For a look at a tv show that didn’t completely dishonor the original Oz source material, be sure to check out the Excellent “Wizard of Oz” tv series by CINAR animation:

the pink elephant in the room 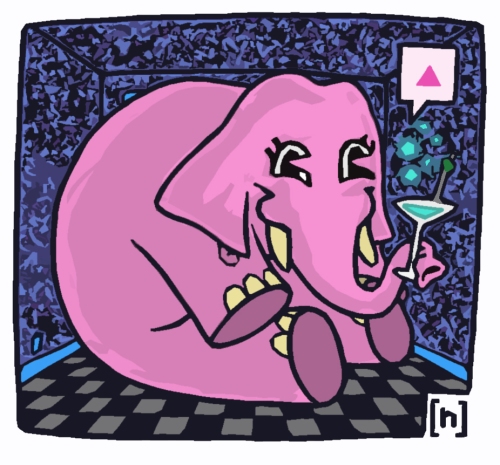 I might as well just get to it: I’m trans and I’ve changed my “nom-de-plume” from NICO.D. to Natacha #9. I’m not going to bore you with the details of my personal life, or what it’s like to be transgender ( Although, I might write a book about that someday… ) . Those who know me, know that this update is something I’ve been talking about doing for some time. I’ve been growing as a person, and I thought it was time I updated my moniker to something that reflected who I am with more accuracy.

So in this case, I am embracing the matrix. I am fully accepting the fact that on the internet I am not a person, I’m a number. Just some data-coded digitized numeral of  person…

And conveniently enough,  since I’m switching to a name that starts with the same consonant as the last one,  I’m not  changing my  T4D signature. As you can see below:

NATNOTE: According to Wikipedia, the #9 embodies the highest level of changes. That works for me.